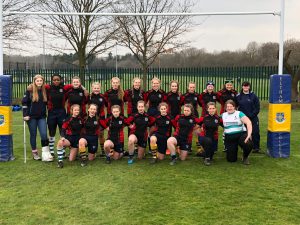 Yesterday saw the A21’s (a cluster of Tunbridge Wells and Sevenoaks under 15’s girls) converge on Royal Wootton Bassett in Wiltshire to play in the RFU National Girls U15 Semi-Finals. The format was a three-way fixture with the top three teams in the South of England, with their counterparts in the North playing the same format to see who would be facing each other in the National Cup Final to be played before the Tyrells 15’s final between Saracens ladies and Harlequins Ladies on the 29th April at the Ealing Trailfinders Rugby Club.  The A21’s had reached the National semi-finals on the back of their success in the Area 3 cup final and the Kent Cup.

The A21’s were drawn to play the first two games, which consisted of two 17 minutes halves with a 10 break between games.  First up was Harpenden RFC who have also won all their previous games and who had a very strong squad. From the kick-off it was obvious it would be a competitive game, unfortunately, one of their more experienced players, Nicole Wythe had to retire from the field of play after taking a knock just 5 minutes into the game.  Despite this setback, the team responded positively with the team captain Catherine Davies running a fantastic line through a strong defense to score in the corner.  A couple of minutes from the end of the first half the A21’s were awarded a penalty some 10 meters out. Few people would have stopped Hannah Smith the A21’s number 8 from that distance, she crashed her way through the defensive line to score number two, 10 v 0 at halftime. The second half was equally tight and could have gone either way. Eventually, Harpenden RFC broke through and scored under the posts converting the try… When the whistle blew it was A21’s 10 v 7 Harpenden RFC.

After a ten minute break, the girls were back in action. Battered, bruised, tired and without some key players they stood their ground. Their opposition for round 2 was a very well drilled and fresh Kingsbridge RFC last years’ National Champions. They were clearly a very good team and in the end, the A21’s lost their first game of the season, going down 24 v 10. In the first half, Lillie Bunce and Tori Sellors crashed through together following a breakdown close to the line, with Catherine Davies scoring their second late in the second half.

The A21’s have represented our County with pride and passion this season and above all displayed the core values that we all hold dear, Teamwork, Respect, Enjoyment, Discipline and Sportsmanship, they should be incredibly proud of their achievements, their coaches Andy Smith of Tunbridge Wells, Paul McDaid and Tom Davies of Sevenoaks also need a special mention for their efforts, long hours on the training pitch and dedication to the girls.