What a difference a week makes, contrast the cold windy conditions of last week with those of this record-breaking hot bank holiday weekend, Kent women traveled to Maidenhead RFC for their next round in their pool games. The 3G pitch was bound to create a fast and open game, even if the hot weather was more conducive to 7s rugby than 15s. Berkshire kicked off and the ball was caught and taken forward a couple of phases but then stripped in the tackle, an area of play that the Berkshire women dominated throughout the game. Berkshire went through the phase but knocked on in the tackle and a scrum was awarded to Kent about 5 metres out near the 15 metre line. Kent’s dominance in the scrum last week could not be replicated early on in this match, the ball was hooked back by Phia and squirted out the back of the scrum over the line and pounced on by the Berkshire blindside for 5 points. The conversion went wide of the posts and Berkshire had their tales up.

Bree Hill kicked to the Berkshire 22 and the ball was taken through the phases being turned over again and again. This was a fierce competition and proved a test to both sides. The pack was unchanged from last week, Alex Zdunek at tighthead, Phia McGauley hooker and Bex Goodwin made up the front row, Yell Pain and Vicki Benbow were in the boiler house again with Courtney Harvey blindside, Ceri Edwards open side and Lucy Hooton at 8. Both sets of forwards went at it like a heavyweight boxing match, neither giving an inch.

Berkshire cleared their lines with a kick which was received by Beth Pickernell at fullback, she commenced a Mike Brown like run up the pitch darting around the defenders but when caught the support had not kept up with her pace. The ball was ripped and turned over by Berkshire. 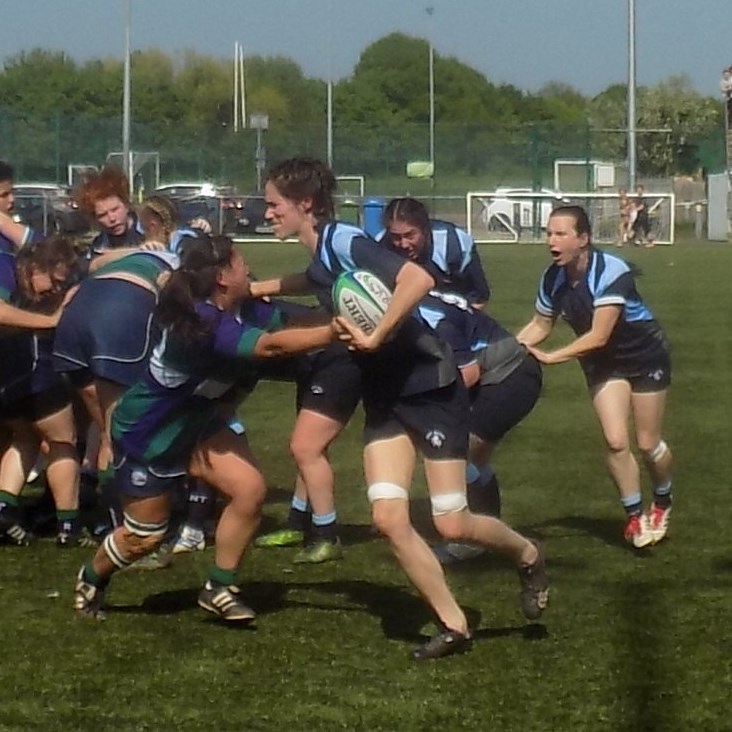 In the ensuing clearance Kent regained possession and were awarded a penalty just inside the Berkshire half, Becca ‘Ginge’ Guild had the presence of mind to take a quick tap and go, off like a gazelle, she off-loaded to Georgia ‘Geo’ Gray in support, the ball was quickly recycled and went though the hands, Bree to Lizzy Nicholl and out to Layla Little on the left wing who had not lost any pace in the heat, dotting the ball down on the left-hand side of the pitch in goal, 5-5. Bree set her sights for the conversion but this was one that even Johnny would have struggled with. The score remained at 5-5

Crystal Trott was marshaling the right wing and had plenty to do in defence, before her hamstring caused her to leave the pitch to be replaced by Emily John.

Kent continued to try and mix up the play but the ball was simply not going their way, Bree slotted through a grubber for Layla but it seemed to build up the pace on the artificial surface and into touch. Berkshire retained the ball better than Kent and built the phases but Kent’s defence was heroic and kept the scoreboard static. Berkshire built up the pressure and the ball crossed the pitch side to side, then after a significant number of phases the Berkshire centre cut back and slipped a tackle to go in under the posts to make the score 10-5 the conversion made it 12-5 just before halftime.

Bree rallied the team at halftime with a rousing speech, the players returned to the pitch and increased the intensity further. The pressure told on both sides, there were a number of unforced errors from the pressure put on by both defences.

Kent seemed to be getting the better of the scrums and piled on the pressure but Berkshire managed to get the ball away even whilst retreating. Max decided to bring on the finishers at about 41 minutes, both props were replaced by Mallory Bott and Kara Hepper, Vicki Benbow came off for a well-earned rest and Lizzy came off from centre, they were replaced by Claire Harrison and Helen Harris. Both Claire and Helen made significant yards when they got the ball, defying the heat and upping the tempo. Nicky Matthews also brought some new energy to the attack in the back row having given Courtney a rest, the Kiwi had given all and the tank was running on empty.

The teams were still at each other hammer and tongs neither prepared to give an inch. The ball was over the far side of the pitch when Layla collided with a Berkshire player and the biggest black eye erupted and closed her right eye, having had a couple of minutes rest Lizzy was back on the pitch

Berkshire was building phases again and after a period of pressure, the centre used great footwork to go over for a try which was converted to make the score 19-5. The game won?

Kent rallied and it was they who piled on the pressure, mistakes being made and Kent upped their game. Kent had a lineout and a kick and chase by Emily was rewarded with a penalty for not releasing. Katie ‘Doots’ Dootson who had replaced Ginge early in the game when Ginge suffered an injury to her elbow, was sharp as a knife, taking a quick penalty and buying an additional 10 metres for not retreating 10. Bree pushed Kent down to the 22, a further lineout, the ball gathered and out to Yell who suffered a nasty ankle injury and the ref blew immediately. Yell was carried from the pitch and replaced by Vicki.  A scrum to Kent, the ball went right and Emily waltzed through the Berkshire defence to score under the posts, Bree drop-kicked the conversion and it was getting tense. 19-12. 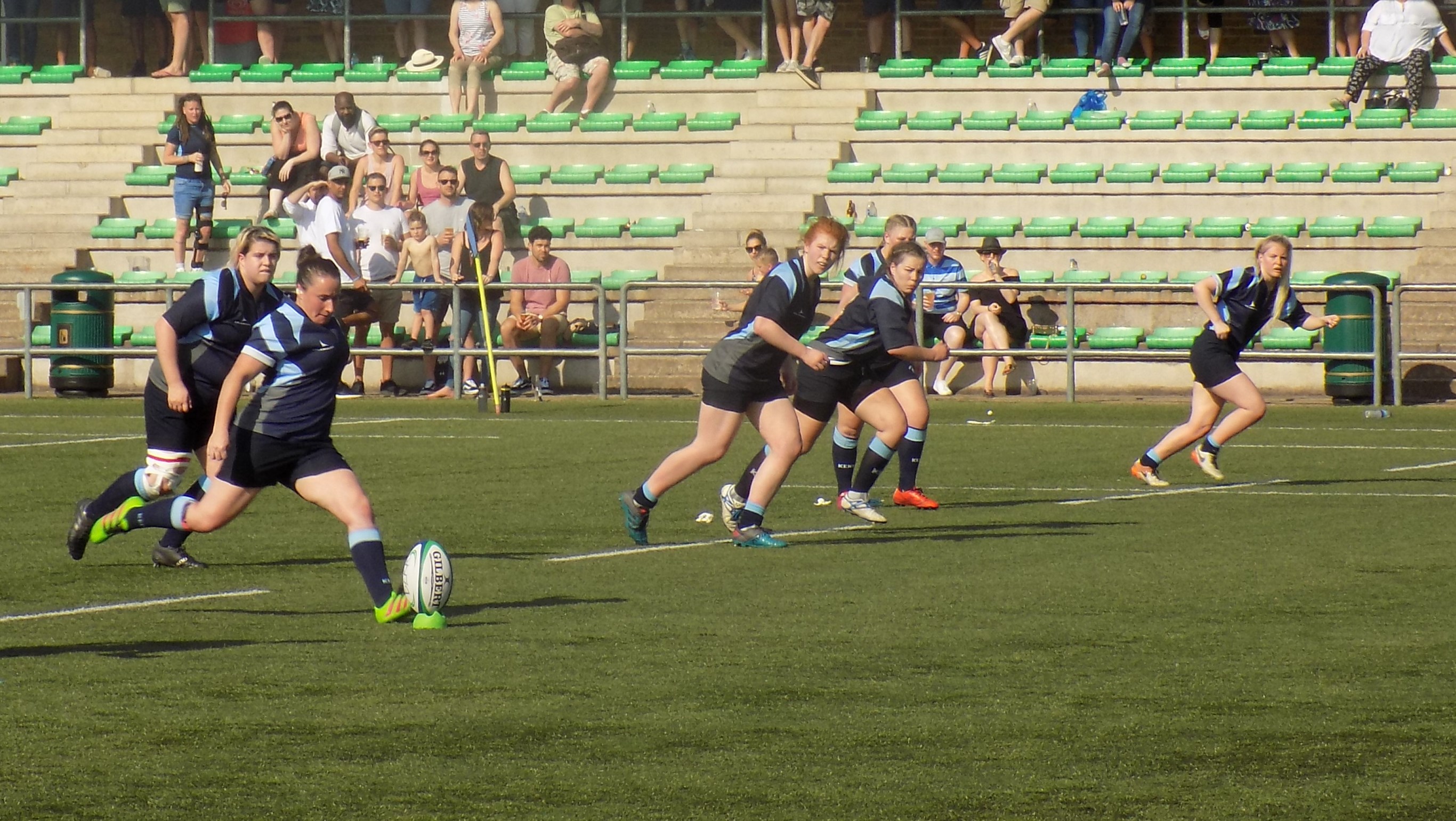 Kara collected the ball from the kickoff and went on one of her trademark runs using the Maori sidestep, the ball was recycled and Kent applied pressure. More phases and a penalty was signaled by the referee, with a free play Bree looked up from the right-hand side of the pitch, identified the space out left and floated a kick to Lizzy on the left wing, the ball bounced but was gathered by Lizzy who crossed the line for a try about 10 metres from touch. 19-17, up stepped Bree, going through her routine and a clean strike of the ball saw it sail through the uprights to level the score. 19-19

Following the kick off Kent gathered possession, a high tackle in the middle of the pitch gave Bree a chance at glory, but it was 39 metres out and the pressure was building. Who would be a kicker? A question I will refer back to later, Bree strode up to the ball and with a mighty boot, it sailed through the air to drift right of the uprights. Berkshire cleared their lines and put pressure on Kent, a number of penalties were awarded and Kent was defending in their 22, another penalty but the play was stopped due to a head injury to Kara who suffered a concussion. Clearly, player safety must be paramount and because of the injury to Kara everyone left the pitch for water. There was a significant pause in play, the referee decided to measure the penalty position and mark it in the diagonally opposite corner, remember I asked who would be a kicker, Berkshire inside centre stood up to the plate, she placed the ball and took her run-up, was this going to be glory? If it went over there was no way back it was the last kick of the match. Boot to the ball, up it went flying towards the goal but it was as if the rugby gods had decided the game must be a draw, the ball went the same side as Bree’s earlier effort from long range and Nicky touched it down for the end of the game. 19-19

It was a tense, brutal and thrilling game for the spectators, the heat was energy sapping and the players had given everything, it showed by the battle scars. We wish all the players who took a knock a speedy recovery, especially Kara who will sadly miss the remaining games through concussion protocol.

Forward of the Match – Vicki Benbow

Back of the Match – Bree Hill

Player of the Match – Bree Hill (selected by the opposition, nominated Laura Levi to “celebrate” with her)