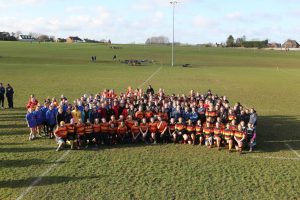 The day had finally arrived…. The rain had finally stopped, the sun was shining, despite the heavy rain over the festive break the pitches were in remarkable condition, however, someone had forgotten about cancelling the 50mph biting easterly wind…

Over 200 girls from across the county descended on to Medway RFC to participate in the 2017/18 Kent Cup.  The Under 15’s competition involved 4 teams that were able to meet the RFU criteria in terms of squad numbers and replacement players with the U18 age group fielding 8 teams.  The rugby was as we have come to expect from Kent Girls was to a high standard with some strong performances from all the teams taking part, as alluded to earlier the pitches were remarkably firm and this gave the opportunity for some good fast paced ball through hand rugby. 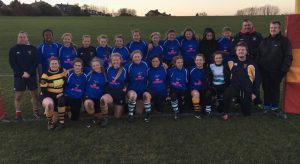 The U15’s competition was the first to wrap up with the Sevenoaks/Tunbridge Wells cluster (the A21’s) emerging as worthy and deserved champions with the Aylesford/Medway cluster coming in as runners-up, both these teams now progress to the next stages of the cup against teams from other counties in our region with the fixture to be played on the 14th January.

The U18’s competition culminated in a thrilling final between the Beccehamians/Old Alleyanians cluster and Aylesford, the game, played under the floodlights and in front of the clubhouse on the 1st team pitch was a well matched and hard fought spectacle with Beccehamians/Old Alleyanians emerging as eventual victors, as with the U15’s the top two teams progress to the next stages of the cup where we wish them well and keep our fingers crossed to see one or all of the Kent teams progress to the Regional semi-finals which are planned for the 11th February 2018. 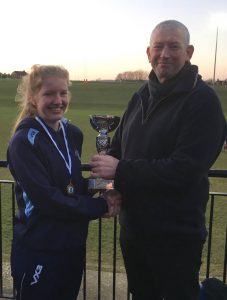 Our sincere thanks must go to Medway RFC for hosting the event, with special thanks to Matt Kuhn for leading a fantastic team of willing volunteers and special note to the grounds keeping team at Medway for the presentation of the pitches, incredible playing surfaces given that the majority of the counties pitches are under 6” of water!