Kent Women start their season well with a win against Gloucestershire 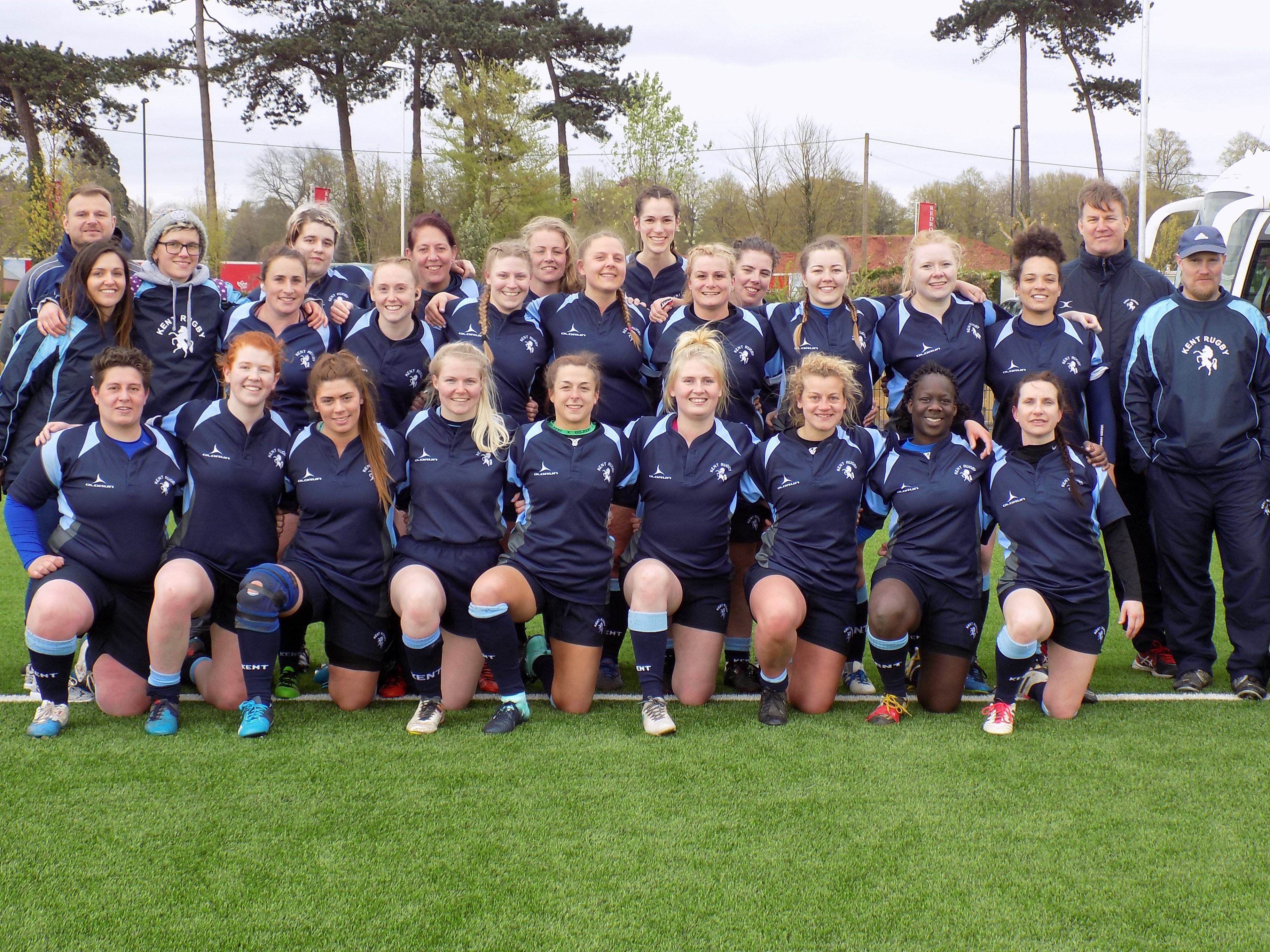 Kent ladies travelled to Ding Crusaders RFC who had magnificent facilities just outside Bristol. The club had recently been redeveloped and had a 4G pitch, which received mixed reactions from the players before the match.

The wind was blowing hard, the sunny weekend last week was a distant memory and the temperature only rose when the ladies graced the field and shone. The kick off had been re-arranged for 3.00pm and when the whistle blew Kent played with the wind at their backs albeit going diagonally across the pitch.

The game started nervously as both sides wanted to claim dominance, the ball was collected by Phia McGauley who started the first of her impressive runs for the game. Continuity in the forwards was good but the gusting wind made it difficult for our backs to adjust although it probably blew out some of the cobwebs from the coach trip.

Alex ‘Polish’ Zdunek, Phia McGauley and Bex Goodwin in the front row were solid, the boiler house of Vicki Benbow and Yell Pain strong and the back row featuring Ceri Edwards, Lucy Hooton and Courtney Harvey added flair, speed and dynamism too. They turned over the first scrum, a pattern that would emerge all game, Becca ‘Ginge Guild passed to Bree Hill at outside half, along the line to inside centre Lizzy Nicholl and then Georgia ‘Geo’ Gray and out finally to Layla Little who dotted down about 5 metres in from the left hand touch line. Bree stepped up and slotted the conversion to make the score 0-7. 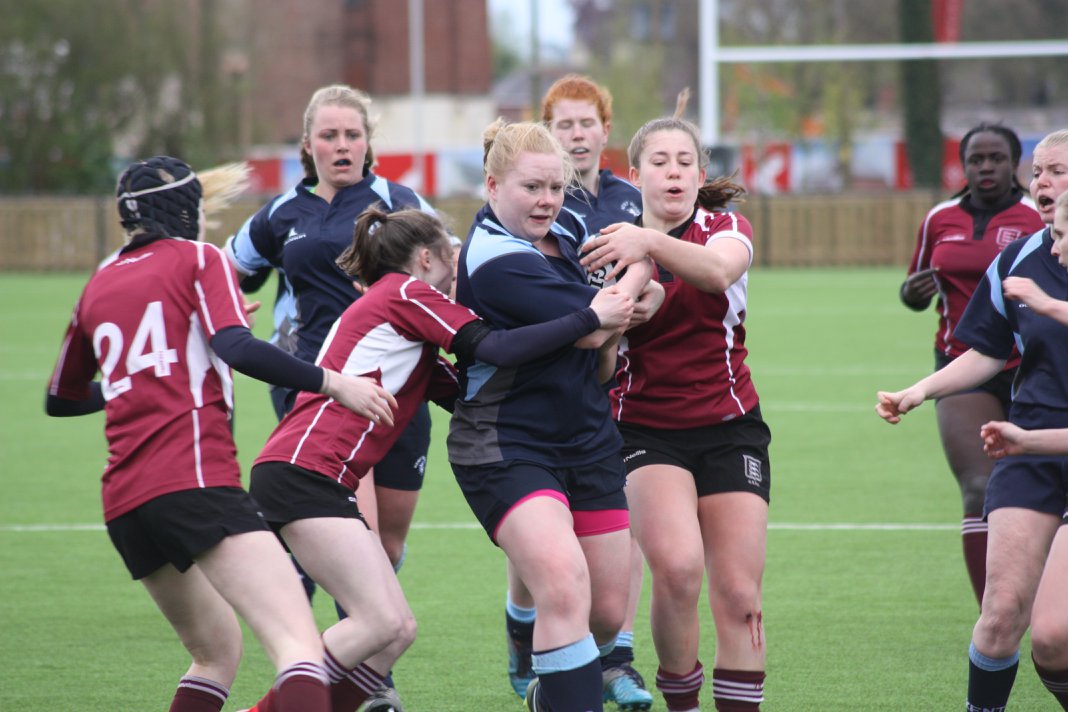 At the kick off the ball was collected and then passed out to Geo who made a storming break, she had Phia to her right and Lizzy left but more support was needed as the Gloucestershire defence had pressed hard and managed to get a turnover. The hosts went through the phases and there were anxious moments for the Kent defence, Ceri who was quite superb in her first senior game for the county turned the ball over and kicked away to just past the 22. The Kent defence piled on the pressure and it eventually tolled, a scrum to Gloucestershire was won again by Kent with Phia striking well against the head, the ball spun along the line to Layla who dotted down her second try in a very similar position to the first. 0-12

Kent received the ball, the forwards were majestic in their handling and offloading, the continuity was as impressive as you will see, the ball recycled and Ginge passed to Bree, on to Lizzy who floated a pass to Beth our full back who’s attacking line at pace seared through the defence, one player to beat and some fancy footwork saw her under the post to give Bree a chance at the 2 extra points, she did not let us down. 0-19

Another great take by the Kent ladies and their tales were up, the ball was retained and pressure built, Geo danced through the defence to put the visitors further ahead. 0-24

Throughout the half the forwards dominated the set piece and the scrum was well drilled and never went backwards. Having gathered possession again the forwards rumbled up the park, there was a knock-on to the right hand side of the hosts 22 and the scrum was set. Another against the head and the ball slide to Ceri’s side of the scrum, she picked it up and demonstrated maturity and confidence above her years, scoring her first Kent senior womens try to the right of the posts. Bree nudged the ball over to take the score to 0-31 at half time. 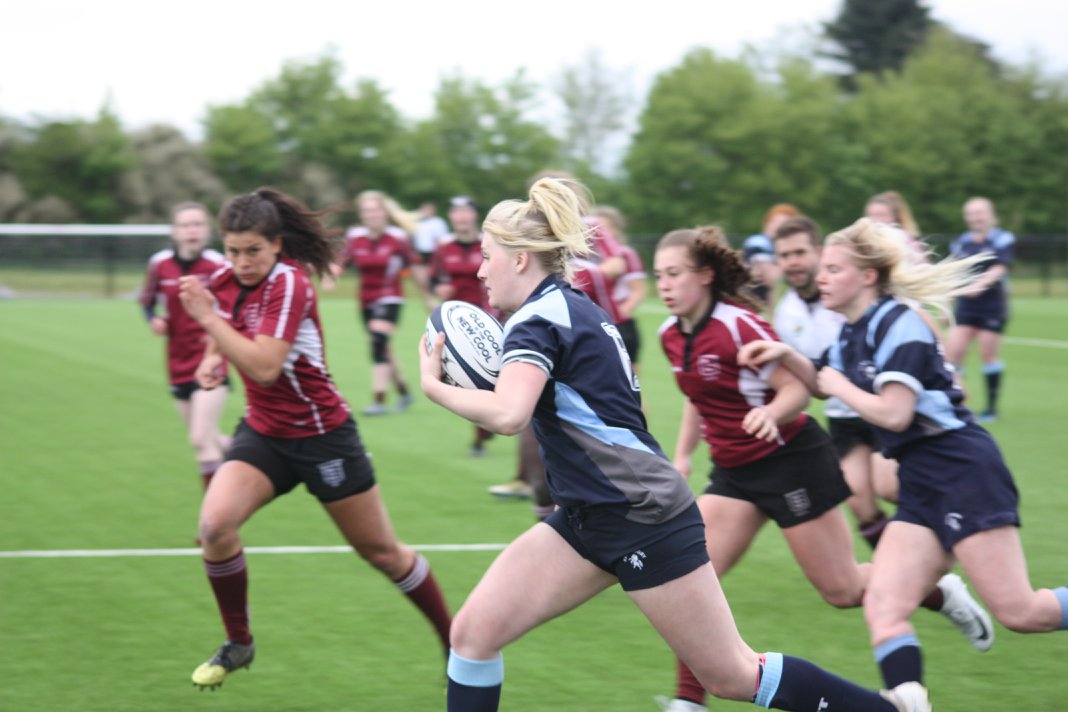 Playing into the wind in the second half presented its challenges, however the ladies kept their foot on the pedal, executing a fierce contest at the breakdown. Kent counter-attacked, the ball went along the line and Geo was back at it again, gliding over the line close to the corner on the left hand side of the pitch. The ferocity of the wind made conversions difficult to say the least. 0-36

Kent received another kick off, the ball was recycled and went out to Bree, the hosts press defence was effective and put pressure on the Antipodean fly half but the dummy she sold was of the highest quality and allowed her to break through and in the play that followed Kent were awarded a penalty in the centre of the pitch. Quick tap and go, Polish the tight head prop powering at pace through the defence, Ceri in support and she was tackled about 5 metres from the line. The ball was recycled quickly and debutant Kent 2nd Rower- Yell went over for another great try. 0-41

It would be remiss not to mention some of the sparkling runs that were made by the other forwards, all of whom played with dexterity and flair, offloading and recycling possession, it was a joy to behold. Co-Captain Lucy Hooton deceived the opposition with speed and power and was unlucky not to score herself but for the last ditch tackling of the defence.

The wind prevented the backs from being able to pass as much as they would have liked to debut players Crystal Trott and later Emily John on the right wing but when they go the ball they both made some sparkling runs.

Head Coach- Max Melville-Brown decided that we needed to bring on the finishers, Kara Hepper was one of the first on and made an immediate impact, her runs from the kickoffs were devastating and having carried the ball up to the opposition 10 metre line she placed the ball perfectly for further attacking play. The forwards recycled and recycled and Phia touched down for a well-deserved try.

Gloucestershire had not learned and kicked to Kara again, who repeated her attack of minutes earlier but the continuity this time was not to be. Gloucestershire fought hard and gradually got some decisions from the referee that re-sparked their confidence, some unforced errors from Kent meant that Gloucestershire was awarded a penalty about 10 metres out, their tighthead Nat English, who had impressed all game with some thundering runs took the ball at pace and went over for a try which was converted to bring the score to 7-48.

Gloucestershire followed that score with another from their fly-half Danni Rigby to bring the score to 12-48. The referee saw an infringement and he went to his pocket and asked Phia to leave the field for 10 minutes, a combination of penalties and Phia was the one chosen to leave.

The replacements came on Clare Harrison for Vicki Benbow in the second row, Emily John for Crystal Trott who had had a fine game. Mallory Bott replaced Polish in the front row and she had been chomping at the bit to get on and did not disappoint.

After some play around the centre of the park Kent was awarded another scrum, the power of the pack meant that they got a penalty in the midfield. Tap and go was the call of the day and with many phases of play, another penalty was awarded. Bree took it quickly, offloaded to Lucy who was inches away from the line when she was felled. Gloucestershire was awarded a penalty and cleared the lines briefly, pressure from the Kent ladies resulted in a knock-on and in the following scrum Kent powered through again. Another penalty which was taken quickly was fed to Clare who had replaced Vicki in the second row and she went over for her debut try. 12-53 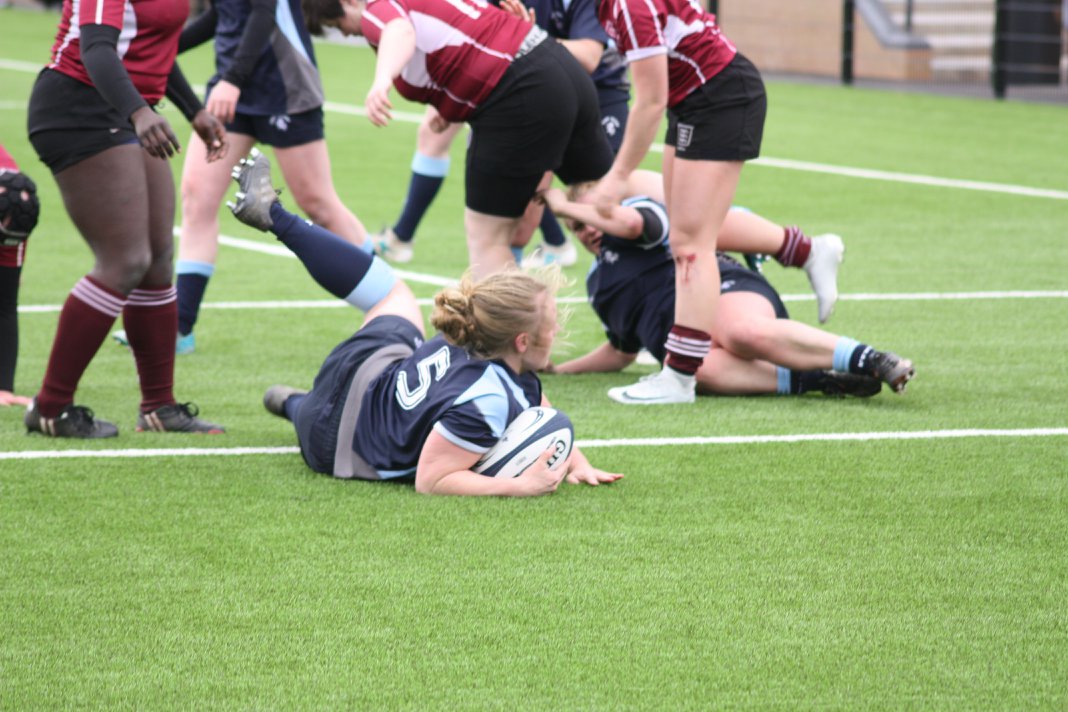 The resulting kick off was secured and after patient build-up of phases the ladies slipped out the ball to Co-Captain Geo who went on another barnstorming run, she was brought down short and the ball was recycled quickly again, out to Ceri who cut through the defence and scored under the posts for her second piece of meat to make the conversion a little more sympathetic for Bree, who slotted it through the posts.

Gloucestershire did not give up, they pressed for more points right to the end although the performance by all the visitors was what you had to take from the game, even when the referee gave Phia 10 minutes rest and the scrum was down to 7, they still powered forward. When the finishers, Katie ‘Doots’ Doots, Clare, Nicole Oraciregiu-Matthews and Helen Harris came on they all added to the strength and depth and gave more questions for the selectors for next week’s game.

It is clear that I am writing this from a Kent perspective but in the bar afterwards the consistent comments from our hosts was the way in which the ladies played, well drilled was the most common compliment, they did us proud.“