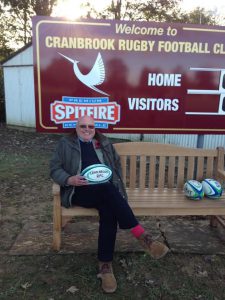 It is worth deep regret that Kent County RFU must announce the passing of a Vice President of the county and Cranbrook RFC’s beloved President Mike McMinnies on 2nd May 2019.

Mike was a true gentleman in every sense of the word, a loyal supporter and at all times wise counsel to the Club.

Cranbrook Rugby Club was formed in its present form in 1958 following a game between some Old Cranbrookians and the School in 1957 in which Mike and his brother Dave played.

Mike was the first Club Secretary in 1958 and remained on the Committee for most of the following 61 years. Mike became President in the 1980s and was the soul and spirit of the Club. His comments and advice at Committee meetings were invaluable and with his encouragement the Rugby Club became the Sports Club, embracing cricket, netball and American Football. Mike fully supported the decision to improve the facilities at the Tomlin Ground.

Following his retirement, Mike gathered his friends together at the Club on Thursdays to ensure the fabric of Clubhouse and Ground was in good order.

Mike loved the Club and was there on Saturdays and Sundays to support all sections of the Club; he was very forward-looking and thought that the advent of a Ladies team was great news.

How wonderful that Mike attended a Club lunch 26 days before his passing and as usual gave an urbane and witty speech.

The funeral will be at St Dunstan’s at 2.30pm on 22nd May, followed by a celebration at Cranbrook RFC.

Rugby blazers would be appreciated.