After 14 years as the Counties representative on the RFU Council and 18 years as the Secretary to the County RFU Mike Cordell has retired from both positions to take up an appointment with his employers based in Gibraltar.

Mike served the RFU on a number of its sub-committees including Club and CB Development, Education and Governance. In addition, he Chaired the International Rugby ticket subcommittee, was the RFU representative on the Students RFU and served as a Trustee of the RFU Pension scheme.

For Kent, he has been an ever-present at County Championship games and at County finals day as well as visiting county clubs wherever he could. In recognition of his services, Kent members at its recent AGM made Mike a Life Vice President of the County and at his last RFU Council meeting in June the RFU Council elected Mike to the position of Privileged RFU Member.

We wish him every success with his new appointment and his move to Gibraltar and will no doubt- with his enthusiasm for all that the County Rugby Union does- see him at a range of activities during 2018-19. 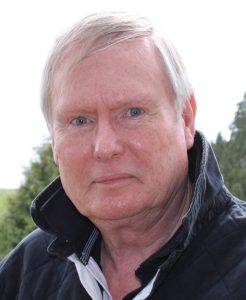 Following Mike’s resignation and in accordance with RFU rules the County sought nominations for his replacement in February and having received 2 conducted a County ballot of RFU qualified clubs in March. As a result, the current Chairman of the County Executive Committee Roger Clarke was elected as the counties new RFU councillor from August 1st, 2018 to serve for a period of 3 years. Roger is a member of Tunbridge Wells RFC, sat on a range of County Committees and became the current Chairman of the Executive 7 years ago. During the three year run up to England RWC 2015 he was interviewed and selected to chair Area 3’s RWC 2015 Lead up and Legacy Group comprising Sussex, Surrey, Kent and Essex.

Having become the new RFU Councillor in the last few weeks Roger is very keen to represent Kent Clubs in a proactive manner and also hopes to be able to visit member clubs for games against fellow County clubs or Executive Committee meetings where wanted. He will also take an active part in the County insight event to be held on the 26th September at Shepherd Neame in Faversham ( see elsewhere in this bulletin). If your Club has any issues or questions which relate to RFU performance, support, and funding or require a visit on these or other related topics then please either contact the Kent administrator Tracy Pettingale office@kent-rugby.org or Roger direct at Rogerclarke@rfu.com