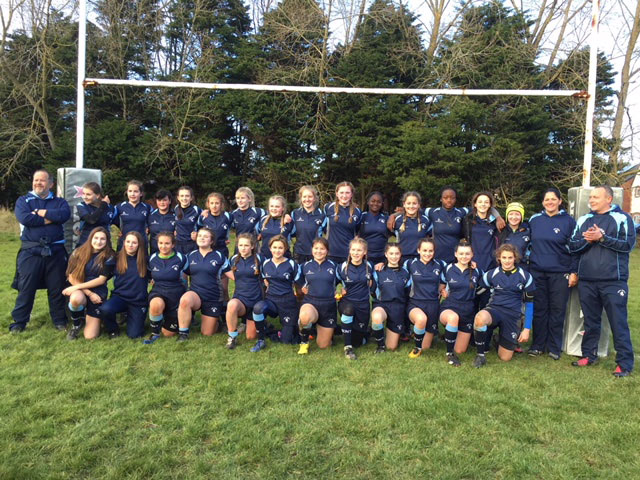 (Kent U15 Girls with their coaches Mark Finnis, Sandra Soler-Gomez and Lee Bruin)

A glorious autumnal day set the backdrop for an afternoon of fast-paced, free-flowing rugby in which no side gave any quarter.

Both the Kent U18 and U15 Girls faced their opposite numbers from Sussex, both teams had come into the games with a positive attitude and well drilled by their respective coaching teams and all were keen to hear the referees whistle.

Simultaneously both games kicked off around 1.15pm with the U15’s taking the early initiative, after an intense 10 minutes of play Kent had scored three converted tries from a combination of good forward play supported by hard running, ball through hand backs play, this initial 10 minutes setting the scene for what was to become a convincing victory.

Despite the final scoreline of 89-5, all credit must go to the Sussex U15’s, not once did they drop their heads and continued playing hard and fast right up until the final whistle.

The U18’s game was a very different sort of contest, to use an analogy from the dark side it was a real game of two halves, Sussex really took the game to Kent in the first half and established a clear lead going into the halftime break.

Following a regroup the Kent Girls re-emerged in the second half with the bit firmly between their teeth, this despite some fairly significant injuries, in fact, the side of the pitch was starting to resemble a first aid post at the Somme.

The game ebbed and flowed with some tenacious tackling and quick ball in hand running starting to turn in Kent’s favour, and then Kent eased their nose in front with a well-worked team try finished with some individual skill and pace, could the U18 girls make it the double over rivals Sussex…. unfortunately it wasn’t to be and the number of injuries was really starting to take its toll, this in tandem with what was a very skilful Sussex team saw the game finish 27-21 in their favour. 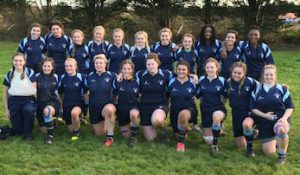 (The Kent U18 Girls Team post-match and complete with field dressings and minus one who had to go to hospital (she was ok… phew!), although unfortunately without coaches John Fitzpatrick, Andrew Ballen, Simon Parsons and Becki Edgeler)

As a mere observer of the games, I must applaud both sets of players, their spirit and good sportsmanship embody what this great game is all about, its got to be said the future of Girls Rugby in Kent is looking very bright!

A note of thanks to Sussex for their hospitality and for organising the days’ events and of course to Worthing RFC for hosting the day.