Kent Seniors back on track! 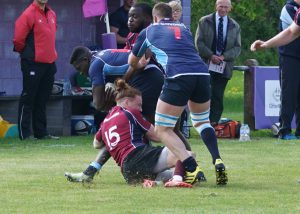 A highly enjoyable match and, arguably, Kent Rugby’s finest hour since their triumph in the County Championship Plate five years ago.  Having narrowly lost out at home to Cornwall a week earlier, an away fixture against the other West Country powerhouse county looked a daunting prospect, but Kent took hold of this contest early and, despite two spirited Gloucestershire fightbacks, eased to a victory which keeps them in contention for another Twickenham final.

‘It’s a significant victory,’ said Kent Head Coach Taff Gwilliam.  ‘With Kent now having three National League One sides all supporting the county it means we can compete with the best.’

‘Gloucestershire was one of those sides and, having never beaten them, to win on the road was a testament to our growing strength.  We’re truly delighted.’

‘The players have been committed, and after a long hard club season have still come together and worked for the victory – they deserve the plaudits.’

On a sunlit spring afternoon at Clifton RFC, Kent were in complete control in the opening quarter.  On nine minutes, good work from Tom Williams and Tom Stradwick sent Nathan Williams on a run, the blind-side breaking two tackles before releasing Kwaku Asiedu down the left touchline for the opening score.

Mark Cooke added a 14th minute penalty, and Freddie Owen’s neat offload in the tackle allowed the impressive Thomas and Asiedu to combine once more, setting the goal-line ruck from which Alex Pickersgill dived across for a 13-0 lead.

Gloucestershire’s initial forays into opposition territory floundered, as the hosts found themselves too slow to the breakdown, but inspired by a couple of excellent breaks from James Dean, they soon forced the penalties that gave them field position.  As their line-out began to function, Harry Hone was driven across from close-range, soon to be followed by Dings Crusaders’ hooker Tom Anderson in similar fashion on the opposite side, and with Newent fly-half Tom Webb adding two well-struck conversions, the host county edged into the narrowest of leads.

However, as the game approached half-time, Cooke’s kick towards the left corner forced Cinderford wing Terence Babarinsa to carry the ball over his own goal, and from the ensuing pressure, Aiden Moss had space to cross out wide, Cooke’s conversion giving Kent a 20-14 lead at the break. 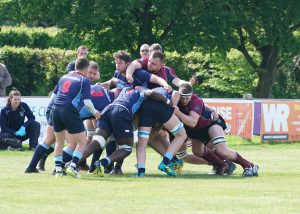 Three further Kent tries seemingly put the game out of sight within 15 minutes of the re-start.  First, Jack Daly’s box kick bounced perfectly for Craig Dowsett to gather and score, and with Gloucestershire losing a man to the sin-bin, Kent’s smoothly functioning line-out and powerful scrum set the attack from which Pickersgill, with a man to spare outside, crossed for his second try.

A quick tap-penalty from the outstanding Daly, in his own half of the field, saw some great handling, before Ricky McIntosh broke through some tired looking tackles for a converted score, giving Kent an apparently unassailable 37-14 advantage.

However, Hone responded for the hosts on the hour, the Cinderford number-eight crashing over after the Gloucestershire pack had muscled though the Kent defences, and Newent outside centre Will Mansfield quickly added another try, as he intercepted on his own twenty-two, raising painful memories for the visitors of the match winning try at Medway the previous Saturday.

In the 70th minute Thornbury replacement hooker Sam Evans was driven over from line-out ball, and with Webb adding his fourth conversion, Gloucestershire were suddenly within four points.

However, Dean’s eagerness saw the Newent scrum-half get himself caught off-side on the Kent put-in, and as Stradwick romped through a gap at the ruck, Kieran Moffatt glided through the hosts’ defence for the try which put the result beyond doubt.

Next Saturday Kent travel to Havant RFC to face Hampshire in their final pool game, whilst hoping current leaders of the South Group, Cornwall, slip up at Brixham against Devon. 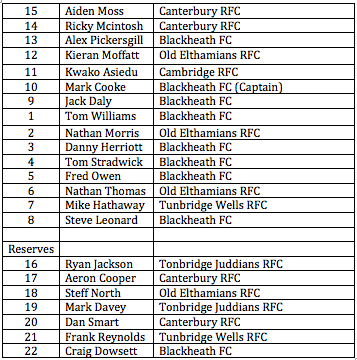