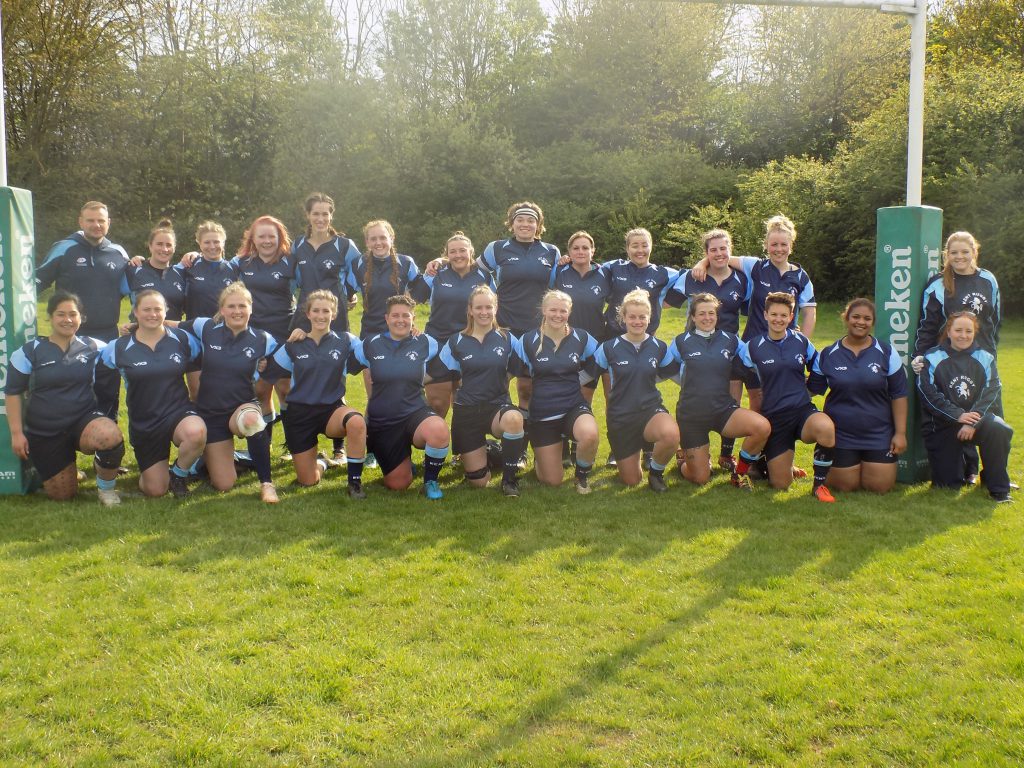 With the weather unsure of what it wanted to do and our previous face off against Surrey being a formidable one, senses in the Kent camp were heightened. This translated into a solid and positive defensive effort from the home side from the outset. No one player backing off of the tackles saw to debutant flanker Emma Gibson turning the ball over and charging forward. Quickly recycled by Rebecca ‘Ginge’ Guild to fly half Bree Hill who fed the ball to Frankie Newby and Layla Little who both cut decent lines into the Surrey defence.

Next phase saw a slick DSP move with Georgia Gray and an offload Frankie Newby scoring her first try for Kent after only 6 minutes. No conversion on this occasion but it gave the squad good confidence to play tactically, kicking back up the pitch whenever Surrey relinquished possession in the Kent 22. Continued stoic efforts for the forwards in defence, it was clear that this game was going to be won or lost in defence. Bex Goodwin put in a massive shift defensively with fellow front rowers- Alex ‘Polish’ Zdunek and Phia McGauley-Cave and a crunching tackle from Bex led to the ball being knocked on and scrum won for Kent.

The work rate didn’t stop there and with help from Lucy Hooton and Becky Smith in the boiler house, a near perfect scrum laid a strong platform for a number of scathing carries for centres Helen Harris and Georgia Gray, most notably a sharp 20m gallop to put Kent into Surreys 22. Not content with carrying well, Helen continued to be an asset in defence with an awesome covering tackle after Surrey were awarded a penalty for a Kent player holding on.

Poor throwing at Surrey’s line out meant that Kent could continue to use the scrums to good effect  but after winning a couple of referee decisions at the scrum, Surrey gained some ascendancy at the set piece, which allowed their openside flanker to put good  pressure on our No 8 and scrum-half as they attempted to shift the ball. Winning their own ball allowed them to fire their backs to run the ball into the Kent 22 just 10m out from our try line. Leading by example Lucy, Bex and Phia forced a knock on and lines were cleared by Bree.

For the remainder of the half, the ball traversed between the two 22 metre lines across the halfway with both teams putting in energetic performances. Great supporting runs from the other debutant flanker, Poppy Branch, and winger Beth Pickerell drove Kent once again into the Surrey 22 and each time Surrey kicked us back down the pitch we had the likes of Ginger, Emma, and Layla charging back and carrying strong with an unwavering desire to go forward.

A penalty for the Surrey flanker going in at the side saw a well-drilled lineout work their maul chewing up a number of yards before Ginge and Bree distributed to the backs to crash it up in the midfield. Forwards were quick to react and work two more phases, with Poppy, Emma, Jasmin and Becky working tirelessly at the breakdown giving Ginge clean ball each time for the backs to send the ball gracefully through the hands to Beth to run in the teams second try before the break!

The Surrey team talk gave them a great injection of zeal and they were quick to lay down their marker for the second half with aggressive performances from their openside and centres. A quick try is what they needed to get a better foothold in the game and their fly-half created just that. Thundering through the midfield handing off two or three players and then drawing our fullback to put her openside winger in under the posts.

Kent spirits weren’t dampened in the slightest and with the noise from the sidelines, only served to consolidate Kent’s defensive campaign. Surrey used every tool at their disposal and looked set to empty the tank to take the lead, but with Courtney Harvey, Yell Pain, Jen, Vik and Leona Osbourne bringing fresh vigour onto the pitch Kent’s resistance stayed strong. Solid efforts at lineout time and in the contact area for Jen and great carries from Leona and Yell. After snuffing out two dangerous scoring opportunities with Poppy, Phia decided she needed a lie down (on the ball!) and 10 minute rest. This didn’t affect efforts, Kent back in possession once again,  Geo led the charge to the try line bouncing off three or four players in her wake. Tackled 10m out from the try line, the forwards stepped up, including this time Clare Harrison who came on with Briar McNamara for Poppy Branch and Helen Harris respectively. Good, quick phases with sturdy carries from Clare, Yell and Lucy in the forwards, saw Surrey tighten up around the fringes leaving acres of space for Layla on the left wing; Bree sent the ball to Courtney who, with her delicate but awesome handling skills floated the ball to Layla over 20 metres. Sadly her opposite number was able to drift across in time and her scoring opportunity was held up.

Both sides making excellent tactical substitutions, Surrey stepped it up with their defence and attack. It was still anyone’s game and the intensity clearly demonstrated the importance of this opening pool game to both teams. Surreys No. 8 picked off the back of the scrum and was tackled by Bree, whose efforts to hold her up were dashed, but the unrelenting Kent defence forced a knock on and a subsequent Kent penalty at the lineout, inspired Bree to tap and go quickly floating another 20 metre pass to a patient Layla, whose wheels were able to get her over the line before any Surrey players could bring her down – SCORE 15-7

Even with this cushion, Kent did not rest on their laurels as they knew Surrey would not either. Good defensive tackles from Briar who also handed off a couple of Surrey players to charge 30 metres up the midfield. Kent knew defence around the rucks would be key and posts and guards were steadfast regardless of playing positions and everyone chipped in to make it work. Rugby, as we know, is a game of attrition and the Surrey wave of attacks, kept coming and managed to open up a hole for their 10 to squeeze into and score, despite the sterling efforts of Polish and Bree.  SCORE 15-14

With no room for error now, the stakes could not be higher. 8 minutes left on the clock in a game where both sides were still salivating at the thought of another try. Neither side lost composure and a sick kick chase saw Emma Gibson fly up and put a solid hit on the receiver with Polish getting her 2nd turnover of the game shortly after. The ball was recycled quickly to Courtney who was tackled by Surrey’s scramble defence, but they were not quite quick enough to stop a quick-thinking Emma who picked and went, scoring over 5 metres, her first Kent try! SCORE 20-14

If this wasn’t enough nail-biting rugby, the crowd at Aylesford Rugby Club were given one last moment of excitement when Kent stalwart Lizzy Nicholl superbly read a wide pass, snatched an interception in Kent’s 22 and screamed down the right hand side with every man and his dog cheering her to score!! She made 60 metres before getting tackled. Ball was retained and in the dying minutes of the game, Kent was gifted a penalty in the 22, but the score stayed at 20-14 to the home side. Amazing scenes!

Congratulations to all, such an excellent display of county representative rugby from both the home and away sides and a pleasure to play and watch I’m sure we can agree. Kent Ladies will now continue their campaign to Twickenham, against East Midlands Counties next week, with Beckenham RFC kindly hosting. Don’t miss out!!

Forward of the Match:

Back of the Match:

Player of the Match: (picked by the opposition)